If you have ever ran a 3D print that lasts a week or longer the last thing you want is to lose hundreds of dollars in material due to a power outage or some other unforeseen problem. I wrote a special feature for 3D Platform in order to be able to complete one of these extremely long prints when such an event occurs.

Here is a video demonstrating the feature in action:

The way it works is the given Z coordinate when selecting “Resume SD from Z” is used to truncate all movements, including retraction Z-hops, which are evaluated to be less than the given value. The result is a perfectly completed print with no noticable recovery artifacts.

I developed a modular electrical panel and enclosure for the CE compliant 3DP1000. 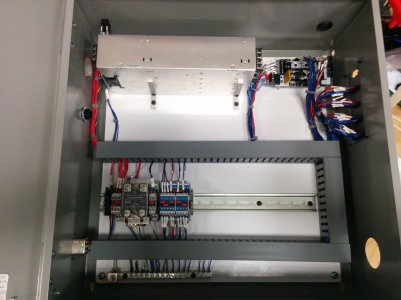 I developed a platform which had an Android tablet running a chroot Fedora GNU/Linux environment, hosting a VNC server for remote access, along with a custom tablet interface of Pronterface.

I developed the electrical system with a drawer style panel for the 3DP Workbench.